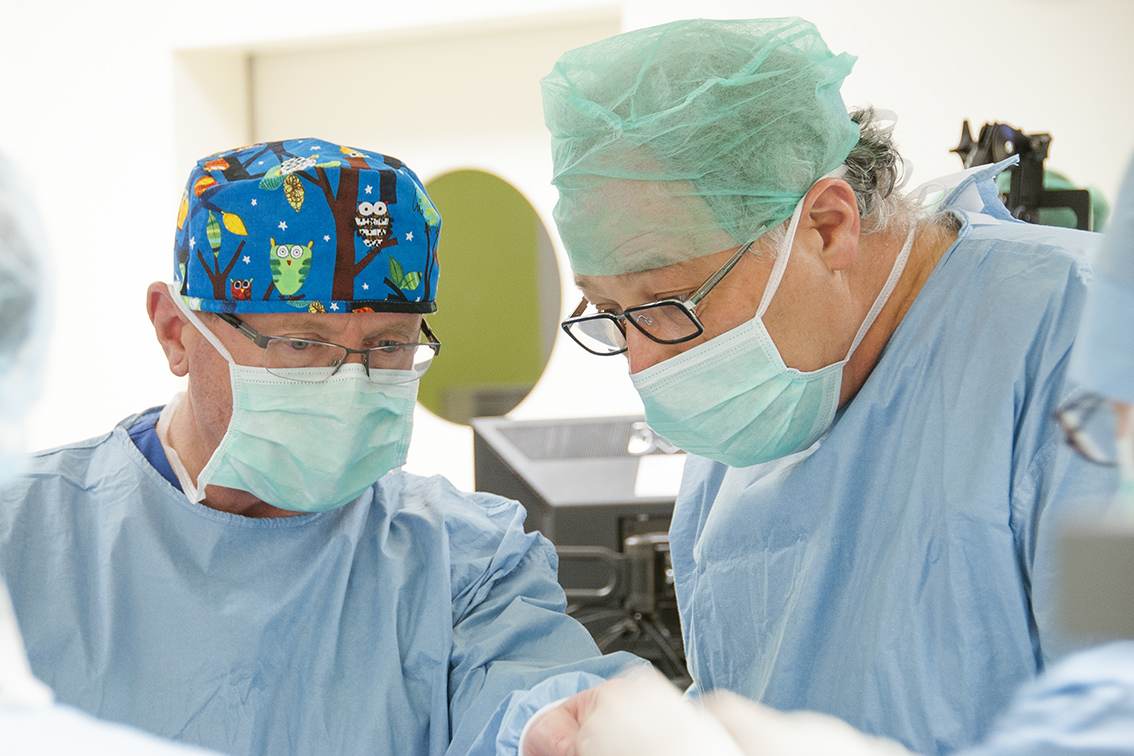 On 23-24 of May, 2014, in the World Hearing Center, the unique surgical procedures in neurosurgery and otosurgery took place. Prof. Henryk Skarżyński organized international team which performed hearing restoring surgeries in patients suffering from rare cancerous disease, neurofibromatosis of type 2. These are complicated procedures, which include extraction of brainstem’s tumors and implantation of auditory implant to the brain stem. The team was constituted with most experienced neurosurgeons, otosurgeons and clinical engineers.

One of the patients operated in Kajetany was 26 years old Monika, a Ph.D. student at the Economic University of Cracow. Monika has been suffering from neurofibromatosis of type 2 for over 10 years and she has undergo several surgeries of extraction of tumors located in the spinal canal. She could somehow function with hearing impairment thanks to hearing aids. That is why, despite the diseases, she could continue her passion – she had study. She has finished a high school, later graduated from the university and even started Ph.D. studies. Unfortunately, two years ago, she completely lost the hearing. A brainstem implant was the only chance for her to return to the world of sounds.

Neurofibromatosis of type 2 is an extremely rare cancerous disease (there are only few dozen of people with this disease in Poland). One of its symptoms are tumors located on auditory nerve (neuroma). They can press the brain stem, one of the most important structure of a central nerve system which manages the basic functions of organism such as breathing, therefore can be life threatening. Moreover, neuromas lead to profound hearing impairment or deafness. The only rescue for a patient is the surgery which includes the tumor extraction and implantation of auditory brainstem implant (ABI).

In Poland, there are patients with neurofibromatosis of type 2, who qualify for implantation. They usually have undergone various forms of treatment, but due to the lack of results they were forced to look for help in other countries. The costs of these complicated surgeries and accommodation they need to cover themselves, only in some cases they are partially refunded from the National Health Fund.

Thinking about the patients in such difficult situation, Prof. Henryk Skarżyński initiated the organization of the team of specialists, who decided to perform these expensive and extremely difficult procedures in Kajetany, and they will be refunded by the National Health Fund.

– Approximately 1 million PLN would cost the trip of this particular group of patients for treatment in another country. In Poland, the total cost is three times lower. – said Prof. Henryk Skarżyński

Next to Prof. Henryk Skarżyński, in the international team were: Prof. Robert Behr, outstanding neurosurgeon and the Director of Neurosurgery Clinic in Fulda Clinic of Academic Clinical Hospital of the University in Marburg; Prof. Waldemar Koszewski, neurosurgeon with 25 years of experience, from Warsaw. These specialist were supported by the group of otolaryngologists, neurosurgeons, anesthetists, clinical engineers, technicians, speech therapists and psychologists.

Implantation of the auditory brainstem implant in patients with neurofibromatosis of type 2 is extremely difficult and complicated surgical procedure which requires extraordinary precision  and experience from the area of neurosurgery and otosurgery. The most difficult cases are patients who had been treated before with various therapies, which haven’t brought the expected results such as suppression of cancerous process or reinstatement to the world of sounds.

– The surgery begins with the opening of cranial cavity and extraction of cancerous changes. It is not an easy procedure as these changes are usually located in the spot where auditory nerve reaches a brain stem and the whole area has numerous adhesions and scars stemming from previous treatment. – said Prof. Henryk Skarżyński. – In the next step, the implant’s electrode stimulating auditory nuclei is placed on the surface of a brain stem. This is the crucial moment during the surgery for the reinstatement of hearing capability. The most difficult is the placement of the electrode in such a way that it produces the best parameters of regained hearing.

At this stage, surgeons are supported by the team of clinical engineers, who perform electrophysiological measurements which test how the brain stem responds to the stimulation of the trial electrode. If this test is positive, it means that information in the form of electrical micro-impulses, delivered by the implanted device, will be received by auditory nuclei and transmitted to auditory areas of the cerebral cortex. After the surgery, the patient will hear. Recovery lasts approximately one month.

The first in Poland auditory brainstem implantation was performed by Prof. Henryk Skarżyński in the year 1998, and it was done also in the international team of specialists from Austria and Germany. The surgery was a success and Prof. Skarżyński’s patient presented the results unlisted so far in the world: after the surgery she started to understand speech freely. She could communicate not only in Polish language, but also in German (later she started to learn a third foreign language). There are only a few such patients in the world. The strategy chosen by Prof. Skarżyński and his co-workers appeared to be safe and effective. Currently, there are 11 patients under care of the specialists from the World Hearing Center.

10 years later, in the year 2008 – also in the cooperation of international team – with the participation of Prof. Skarżyński the first in the world surgery of bilateral auditory brainstem implantation was performed in Kajetany. The results of the systematic rehabilitation were very satisfying – the patient who is a musician, returned to his active professional life and recorded his third album.

The patients who are under care of the Institute of Physiology and Pathology of Hearing are the group of the best rehabilitated patients in the world. This fact is stated on the basis of research done by Prof. Bob Shannon, one of the pioneers in the brainstem implant program in House Research Institute in Los Angeles. On the request of Food and Drug Administration (FDA) he has evaluated effectiveness of this method of treatment in many centers across the world. The patients from the Institute of Physiology and Pathology of Hearing have received the highest result.