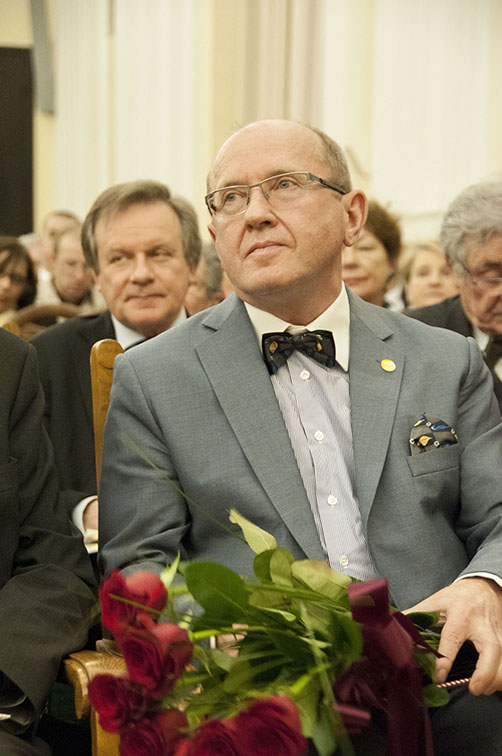 In the laudation, professor Leon Gradon, Chair of Integrated Process Engineering of the Warsaw University of Technology, emphasized his outstanding contribution and scientific achievements of professor Henryk Skarzynski. – The works of professor Skarzynski in the field of otology, related to the latest solutions in the preservation of residual hearing and the treatment of partial deafness – a field that is still being researched – have been cited in the international literature more than 700 times over the last 4 years. Professor Skarzynski is the author and co-author of 14 patents for devices and methods related to medical technology. – said professor Gradon. He also reminded of other Skarzynski’s achievements, including both organisation of the establishment, which, according to independent surveys, is the best otorhinolaryngological hospital in Poland and one of the best in the world and the effort to lead to the adoption of the European Council conclusion on equal educational opportunities for children with communication disorders.

– Representatives of technical and pure sciences has always taken an important place in the projects implemented by professor Henryk Skarzynski. – said professor Gradon. Currently , over 300-person team of the Institute of Physiology and Pathology of Hearing (IPPH) comprises almost the same number of engineers as doctors. Examples of entities operating within the Institute, where engineers play a key role, include Implants Auditory Perception Department and Bioimaging Research Center. Thanks to those entities, the Institute has become a leading research center of the fMRI technique and electrophysiological methods.

Receiving the Medal of the Warsaw University of Technology, professor Henryk Skarzynski said: Thank you for the recognition of my and my team’s idea. I thank those who contributed to my achievements, who could notice, appreciate and positively evaluate them. Today the achievements have been personified and are associated with me but in fact they are the effect of a team work.

– On this occasion, I would like to announce three truths. – said professor Skarzynski. – It is true that for over 30 years, creating the conditions for modern treatment, we relied on close cooperation of doctors, engineers, psychologists, pedagogues and other professionals. Thanks to us the engineer has gained a new status of a clinical engineer and therapist. The second truth is that we cooperate with many teams. I thank the representatives of the Faculty of Electronics and Information Technology, Faculty of Materials Science and Engineering, Faculty of Mechatronics. Together we did a lot. Today, the dimension of this cooperation could serve as a subject of several good doctoral dissertations. The effects of this cooperation with the Warsaw University of Technology teams comprise important solutions implemented into clinical practice. The third truth is that this is just the beginning of our cooperation – said professor Henryk Skarzynski.