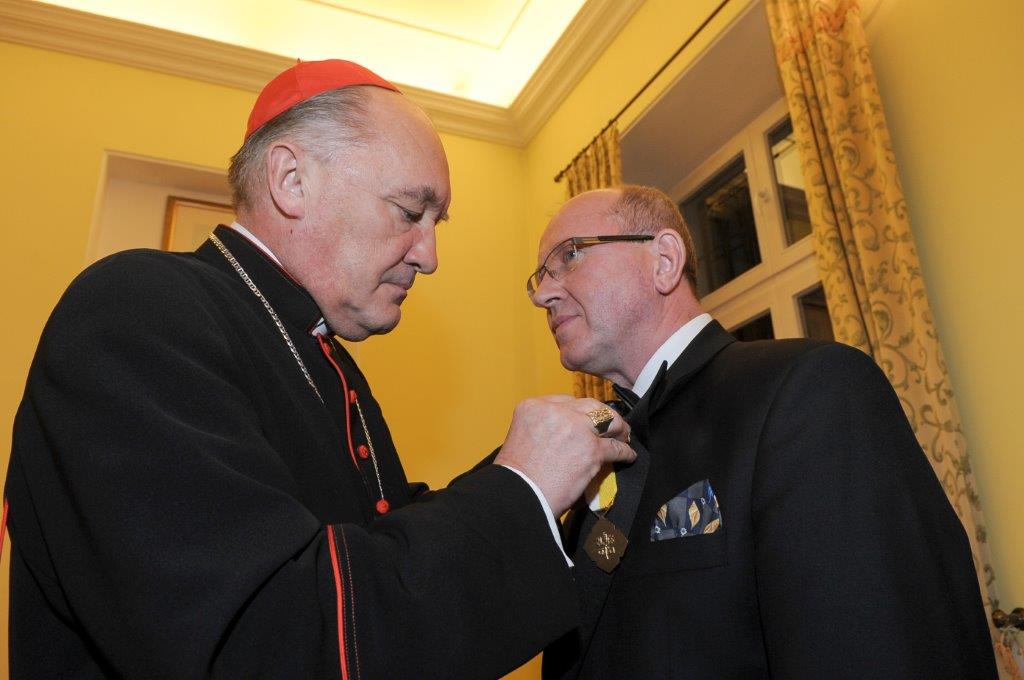 On 18 November 2013 in the House of the Warsaw Archbishop took place an unusual ceremony- presentation of the Papal Medal Pro Ecclesia et Pontifice for Professor Henryk Skarżyński. Ceremony was started by the sublime words of His Eminence Cardinal Kazimierz Nycz, the Warsaw Metropolitan. It has become an extremely important event, not only for Professor Henryk Skarżyński, but also for the whole medical and scientific community.

When Cardinal Kazimierz Nycz was presenting the Papal Medal, he said: – Professor Skarżyński could connect two calling in his life, basic for every lay person in Church: the calling of the man who lives in the family and brings up his children with the calling of a man who choose a mission of a doctor. On this road he reached so much, that the whole Poland, Europe and the world use. Use his intellect, knowledge and wisdom.

The participians of the meeting was inter alia: Undersecretary of State in the Office of President Maciej Klimczak, Deputy Minister of Health Aleksander Sopliński, Former Prime Minister Józef Oleksy, Chairman of the Regional Medical Chamber in Warsaw Mieczysław Szatanek, Chairman of the Polish Medical Society Prof. Jerzy Woy-Wojciechowski. In addition the ceremony collected many other distinguished guests from the world of science, policy. There were representatives of the Church, the media, co-workers of Professor Skarżyński, as well as family and friends.

Congratulating at first Former Prime Minister Józef Oleksy said: – For me the Papal Medal for Professor Skrażyński is the proof that this doctor and his authority has already crossed the border of all continents. As his longtime friend I percept him through the prism what kind of person he is. Extremely open to others, helpful, patient and willing to work 24 hours a day. This last isn’t known as a virtue for all. Professor is a man, who is constantly looking for new solutions, competing with the world and in this area he has amazing achievements.

The granting of this unique decoration for Professor Skarżyński is a sign of notice and acceptation of idea, which serves the people, serves a man, improves daily interpersonal communication. Through the implementation of this idea hundreds of thousands small and adult patients was restored to the world of sound by Professor Henryk Skarżyński. Prof. Jerzy Woy-Wojciechowski congratulating, said: Our Friend, Professor Henryk Skarżyński is a great doctor and a wonderful, good man. The medical profession is both an art as a service with the greatest, supplemented for life knowledge for the other people. What makes Professor Skarżyński special is the fact, that he is the real doctor, which have a vocation to the service of man, like a priest. All these merits has Professor Skarżyński.

Papal Medal was awarded to Professor Skarżyński as an appreciation for his involvement to work for the man and for a common good. This aim of Professor’s activity was the highest recognition in the congratulations the President of the Regional Medical Chamber in Warsaw, Dr. Mieczysław Szatanek: (…)Professor Skarżyński restores not only the hearing. He restores the possibility of contact with a environment, of personal development and first of all he gives a full, normal life in society. And this is the broader dimension than just treating patients of his work.

Maciej Klimczak, Undersecretary of State in the Office of President mentioned about the patients too: – I had the opportunity to observe Professor at work. I heard a delight the patients saying about him. I hope there will be more people like a Professor in our medicine.

The Pontifical Medal was awarded not only for the activities for the patients. Special appreciation to organizational success spoke the Undersecretary of State in the Ministry of Health Aleksander Sopliński: Professor is a creator – he created something unprecedented in Polish conditions. Something that make famous Polish medicine, Polish scientific thought, Polish innovations for health care around the world. Therefore, I wish nothing will hamper you, Professor. Create more!

On behalf of patients – both children and adults – Bishop Tadeusz Pikus thanked warmly: – Sometimes you help people in a hopeless or very difficult situation. I thank you for it very much.

The official part ended Professor Skarżyński, who thanked heartily for such a large presence of his guests and said goodbye by special for the occasion prepared words:

when you hear about

this means you have a smooth senses.

so many friends the circle form

with them you can share this day – and the next one.”