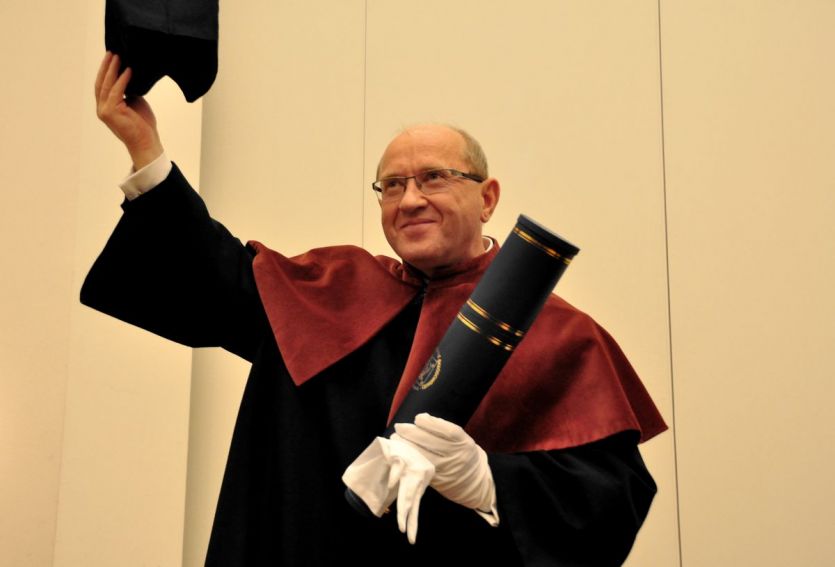 As the resolution of the Senate states, the title was awarded for: “An outstanding achievements in the fields of otorhinolaryngology, audiology and phoniatrics, great service to the public and science, preparing and realizing numerous medical programs for the treatment of deafness in adults and children, and especially for a long and good cooperation with the faculty of Humanities of the University, which lead to creating unique field of studies ‘speech therapy and audiology” and  development of scientific research (…)”.

The promoter of the doctorate was Professor Stanisław Grabias from the faculty of Speech Therapy and Linguistic Studies at the University, who was impressed with Professor Skarżyński’s achievements “When we look at Professor Skarżyński’s achievements we need to stop for a moment and think. It is almost impossible to believe that one man with knowledge and passion is able to make such big progress in such a short time (…). As we can see, Professor Skarżyński built the Institute of Physiology and Pathology of Hearing unbelievably quickly, which comprises recently opened World Hearing Center. This Institution sets the trends in modern audiology throughout the world and Professor Skarżyński himself, as a surgeon with great intuition and skills, leads the changes and determines the directions of development in his area”.

During his speech, Professor Stanisław Grabias also reminded about pioneering surgeries and other achievements of Professor Skarżyński: the first person in Poland to perform hearing implantion: cochlear (1992), brainstem (1998); middle ear (2003). In 2002 he was the first person in the word to elaborate a medical program for the partial deafness treatment in adults; in 2004 he performed the first surgery on a child. His method is known around the world as “Skarżyński’s method”. It consists of a new electrode and clinical procedure and was introduced to 9 medical institutions across the world.

Moreover, Prof. Skarżyński discovered dozens of new clinical solutions for the cochlear implants, taking a big step forward in Polish and world hearing implant research. He was also the originator and organizer of the second in Europe „Cochler Center” – 1993, ‘Internationl Center of Hearing and Speech’ -2003. His biggest achievement in scientic, clinical and educational activity was building and launching a concept of the Word Hearing Center in May 2012. Thanks to two decades of Prof. Skarżyński’s hard work, Poland has found itself at the forefront of the group of countries which carry out the hearing screenings in children.

After receiving the Honorary Doctorate, Professor Skarżyński said: “ I would like to thank Professor Grabias, the Senate, the Dean of the University, the Members of the Faculty Council and the University Committee for noticing and appreciating our activity and making this ceremony happen”.

During the ceremony Prof. Henryk Skarżyńkski, a world class surgeon and expert in the fields of otorhinolaryngology, audiology and phoniatrics, also received from the Dean Professor Stanisław Michałowski a statue of Maria Curie Skłodowska University, also known as “Polish Noble Prize”.

Newly awarded Honorary Doctor gave a lecture for the guests and friends present at the ceremony on  “The importance of hearing and speech in modern society”.

« Professor Henryk Skarżyński decorated with a “Special Icebreaker“ award The Tree of Freedom in the Park of 10 Thousand Steps in Kajetany. »