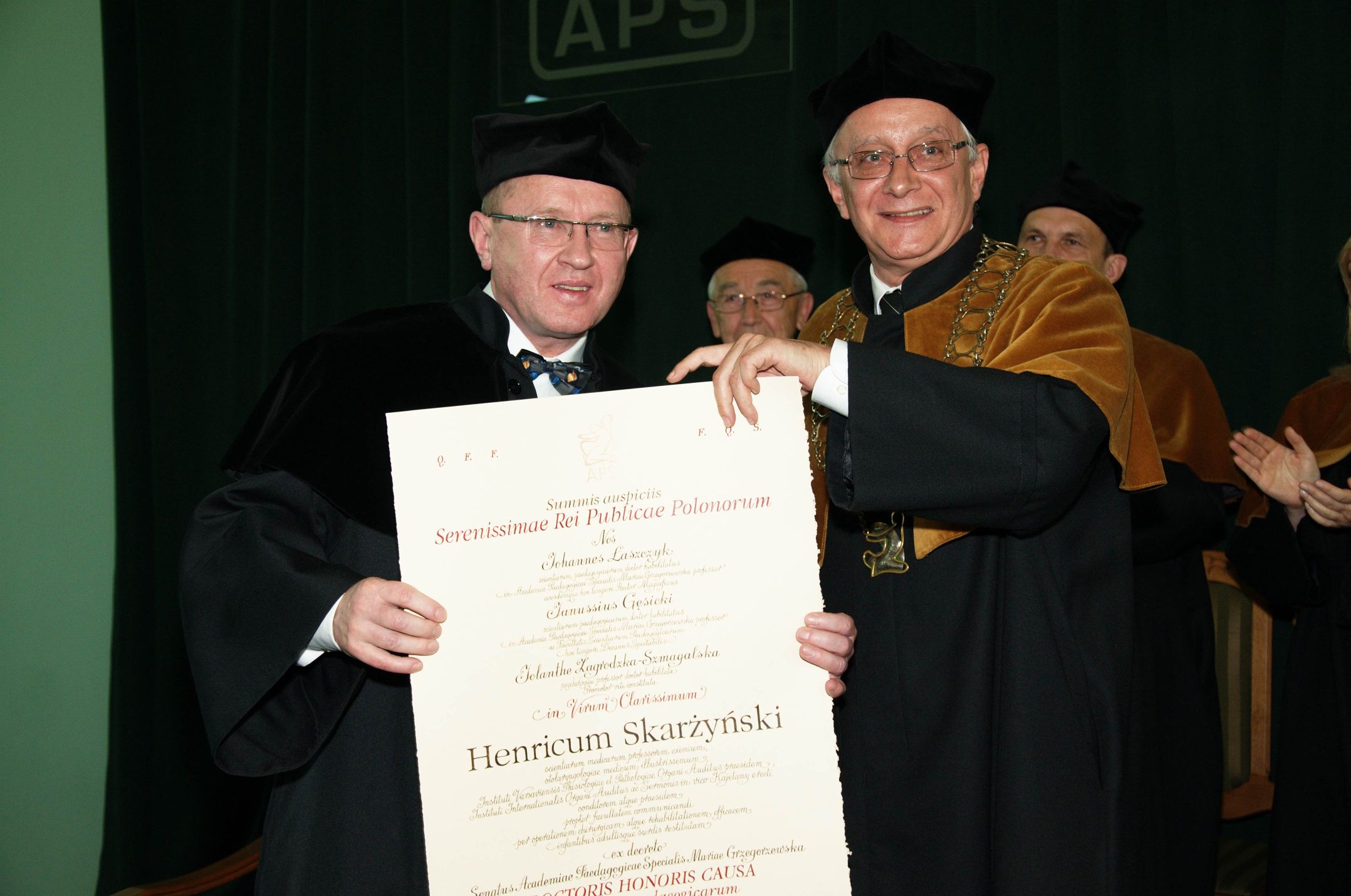 The Maria Grzegorzewska Academy of Special Education in Warsaw awarded professor Henryk Skarzynski with a degree of honoris causa.  – He is a great scholar, excellent doctor and a philanthropist, who devoted his job to hearing impaired people. – emphasized professor Jolanta Zagrodzka, vice-rector of the Academy, promoter of doctoral theses.

The merits of professor Skarzynski include the creation of the Institute of Physiology and Pathology of Hearing, International Center of Hearing and Speech in Kajetany and also the building of the World Hearing Center, which comes into use during the Polish presidency of the EU. These merits are the results of professor’s dreams which eventually came true. In this way, he managed to undermine the general belief that financial problems exclude any constructive activities – either in science or health services. – Professor Skarzynski is a visionary and a great speaker. He has a power to convert the most difficult challenges into the real deeds. – said professor Zagrodzka.

The Senate of the Academy also appreciated professor’s efficiency in undermining scientific dogmas. This is visible in the creation of innovative methods of treatment of partial deafness by means of cochlear implants (the pioneering surgery took place in 2002). Thanks to a surgical technique known as Skarzynski’s method, it is possible to bring help not only to deaf patients but also to millions of people whose hearing deteriorates with age. Moreover, in the Institute of Physiology and Pathology of Hearing, many solutions in telemedicine were implemented: distance consultations, telediagnostics, modern e-learning process, telefitting – the revolutionary system of remote fitting of cochlear implants in patients after surgical treatment,  or the Nationwide Network of Auditory Telerehabilitation Centers, which uses the latest software and video-conferencing devices and the unique highly-specialized procedure of matching  of electrical stimulation parameters. Professor Malgorzata Kupisiewicz from the Academy, evaluating professor’s merits, emphasized the modern approach to the treatment and (re)habilitation of both children and youth. As part of many medical policy programs, over 15 000 children with severe hearing loss underwent surgical treatment, the principles of diagnostic and (re)habilitation proceedings were developed, the breakthrough in hearing prostheses in the young children was finally achieved. – wrote professor Kupisiewicz

Professor Tadeusz Tołłoczko, former rector of the Warsaw Medical University, said that professor Skarzynski – the author of 14 patents, distinguished at many international innovation events – is true to the latest science, often relating to business. – Patents give evidence of the link between the science and the life, and also the understanding of the bounding science policy in the whole world, which guarantees the success. – said professor Tołłoczko. The spirit of innovation, characterizing professor Skarzynski, was also perceived by professor Michal Kleiber, the President of the Polish Academy of Sciences. He wrote that professor Skarzynski is an educated scholar who believes that the science is the means of exploration of the world and it should serve for the benefit of the world and all the nations. This aspect of professor Skarzynski’s work was also mentioned in a letter from Bronisław Komorowski, the President of Poland. – Your medical practice is encompassed into the framework of equal opportunities. Your output is equal to bringing constant help to people who cannot fully benefit from both material and intellectual goods, the access to which we achieve thanks to the unrestricted participation in the social life. – wrote the President. This solemn event of awarding professor Skarzynski with the degree of PhD honoris causa took place during the sitting of the Senate in the Maria Grzegorzewska Academy of Special Education in Warsaw on May 20th , 2011.  The rector of the Academy and professor Skarzynski received many signs of compliments from people from Poland and abroad.