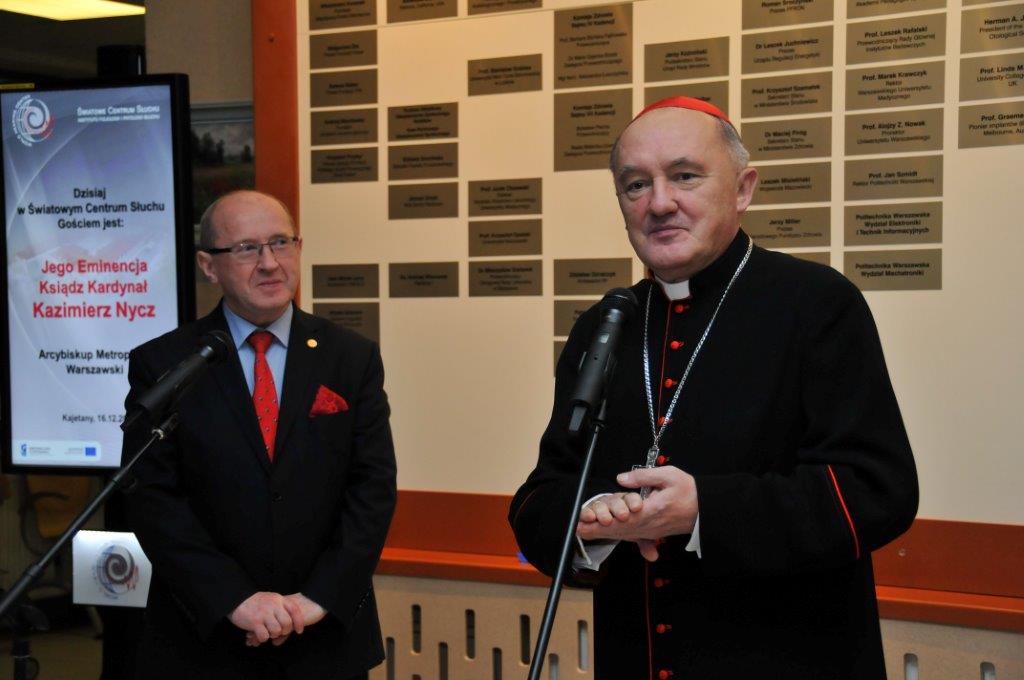 – There are unique people, who I was lucky to meet and without whose help we would have never created this Institute in Kajetany. The “Friends forever” board is to thank all those people who noticed our passion and our work. – said professor Henryk Skarzynski welcoming his Eminence Cardinal Kazimierz Nycz, who on December 16th, 2013, came to the World Hearing Center in Kajetany in order to solemnly unveil his name plaque on the board.

The board “Friends forever” welcomes all patients and visitors of the World Hearing Center, reminding politicians, artists, prominent scientists, who in a special way contributed to the creation and development of the Institute of Physiology and Pathology of Hearing. It includes the name of Bishop Alojzy Orszulik, who has supported professor Henryk Skarzynski’s ideas, concepts and actions for over 20 years. Now Cardinal Kazimierz Nycz has joined the group of “Friends forever”.

His Eminence Cardinal Nycz was the guest of honor at the Institute of Physiology and Pathology of Hearing during the opening ceremony of the World Hearing Center. He recently decorated professor Henryk Skarzynski with the Papal Medal Pro Ecclesia et Pontifice as a token of appreciation and commitment to work for the man and the common good.

– I have learnt a lot about the Institute during the opening ceremony of the World Hearing Centre. – said Cardinal Nycz when unveiling his plaque. – Nevertheless, it is sufficient to type the name of professor Skarzynski or simply “Kajetany” to the web search and only on the basis of virtual reports one can get an idea of what has been achieved here and what is the scale of activities taken up by the Institute. I mean not only a quantitative scale and massive intake of patients, but also the highest quality of medical services – complex surgeries and procedures that you can perform. Everything you do as good Christians is to make people hear. Congratulations. – said Cardinal Nycz at the end of the ceremony and gave his blessing to the team of the Institute.